Just west of Piccadilly station in Manchester lies a street called Granby Row. Locals will be familiar with the small park positioned alongside the narrow lane for one obvious reason: There’s a gigantic bottle of Vimto slap bang in the middle of the grass.

The enormous wooden monument stands proudly in front of the building that first served as the factory for the extremely sugary, extremely Mancunian soft drink. Vimto is as synonymous with Manchester as Oasis and Alex Ferguson, so what’s the reason for it also having a strong association with Ramadan?

First, a little history. Vimto was invented in Manchester in 1908 by the pharmacist John Noel Nichols. At the time, the temperance movement – AKA the ‘don’t drink booze’ movement – was going strong, and followers wanted alternatives to alcohol. Step up John Nichols, whose sugary mix of grapes, berries, blackcurrants and herbs promised to deliver ‘vim and vigour’ to the (sober) people. 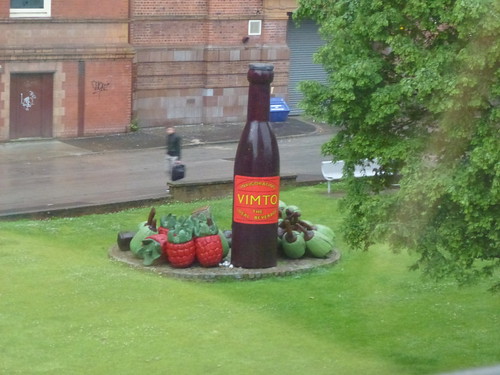 It proved very popular. Soon, Vimto was being exported to the British Empire, where it gained a particular hold on the Indian subcontinent. When many Indians moved to the Middle East in the 1920s for work, they brought their love of Vimto with them. That was just the start of a long-lasting relationship. As of 2013, over 20 million bottles of Vimto were being produced in Saudi Arabia to meet the demands of the Gulf market.

Now, Vimto is the drink of choice for breaking the fast during Ramadan in the Middle East, with many families kicking off Iftars with the beverage. So what explains the popularity? In an interview for Radio 4, Manchester imam, Asad Zaman, said: ‘One of the reasons it is so popular in the Middle East is because they have quite a sweet tooth.

‘After a day of fasting your stomach has collapsed and your body is really low on energy. Anything sweet is a quick fix in terms of energising your body. Of course there are other things like dates which are recommended.’

To cater to the region’s tastes, the Vimto sold in the Gulf states is sweeter than its British counterpart. A spokeswoman for Nichols, the company that manufactures the drinks, told the Guardian last year that the Middle East recipe is twice as concentrated. It is now so popular during Ramadan in the Gulf that some stores limit purchases to two bottles per customer.

While delving into the world of Vimto and Ramadan, we even found a number of Vimto mocktail recipes on YouTube, including Vimto with extra fruit, Vimto slushies, and a bizarre looking combo of Vimto and strawberry yoghurt.

We mean there’s having a sweet tooth, but this is be-up-for-48-hours-then-faint territory.

While Vimto may be delicious, we reckon you should try to break your fast with a glass of water before moving on to the purple stuff. And if you ever get the chance to stroll along Granby Row, go check out the Vimto monument. In this day and age, it’s as Middle East as it is Manc.

To foster understanding & tolerance, Saab began hosting dinners, inviting neighbours, strangers and even the Uber driver who picked her up from the shops.

Cloud Bread: A Delicious Snack to Try During Ramadan

Despite the name, cloud bread isn’t really bread at all. You achieve the not-bread by whipping together eggs, yogurt, and cream of tartar, then baking.

Ramadan takes discipline & anything requiring self-control can cause us to slip. Let’s look at six mistakes we often make this month.