Journalism is crucial to a functioning democracy.

A free press not only keeps the people informed, but holds truth to power, meaning our political leaders must account for their actions.

Recently, Time Magazine named Jamal Khashoggi, and other persecuted journalists, as its ‘Person of the Year’.

In light of the Time article, we wanted to look at some of the journalists the magazine highlights, starting with Khashoggi himself.

In the early stages of his career, Khashoggi worked for a number of news outlets in Saudi Arabia, often serving as a foreign correspondent to nearby countries. As the years passed, he became increasingly vocal about the Saudi regime, often criticising its crackdown on free speech, disdain for women’s rights and hard-line Wahhabism.

In 2003, the Saudi Arabian Ministry of Information dismissed him as editor-in-chief of the Saudi Arabian daily Al Watan, after a columnist at the paper wrote unfavourably about Ibn Taymiyyah, who is considered the founding father of Wahhabism. Fearing for his safety, Khashoggi went to London in voluntary exile.

The next decade saw Khashoggi pen regular columns for the Washington Post. Despite his exiled status, he actually supported some of Crown Prince Mohammed bin Salman’s policies in the kingdom. However, he also believed many of the progressive moves—like the opening of cinemas—concealed far more egregious restrictions of speech and human rights.

As he asked in the Washington Post in May: “Must we choose between movie theaters and our rights as citizens to speak out, whether in support of or critical of our government’s actions?”

As long as there are journalists to continue Khashoggi’s work, these questions will be answered.

While reporting on the Rohingya refugee crisis, two Reuters journalists were arrested and charged with violating a state secrets act. Kyaw Soe Oo and Wa Lone have since been sentenced to seven years in jail, a move that has provoked international condemnation of the Myanmar government.

The two journalists were investigating the murders of 10 Rohingya men by the army in the northern Rakhine village of Inn Dinn before they were arrested. The men have always maintained their innocence, claiming they were set up—a fact confirmed at the trial by a police whistle blower.

Even so, the men are still in custody simply for doing their job. Their treatment reveals the vital nature of a free press. Without it, an event the UN has labelled “textbook ethnic cleansing” would go unnoticed. 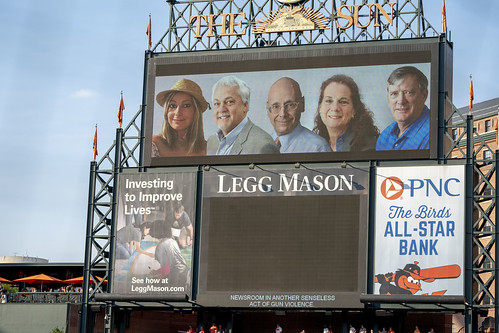 Victims of the Capital Gazette shooting are remembered at a baseball game. Credit: Keith Allison via Flickr.

In June, five staffers at the Capital Gazette in Annapolis, Maryland, were murdered by a gunman angry about previous coverage of him in the paper. The atrocity made the US the fourth deadliest country in the world to be a journalist in 2018, tied with Mexico.

Despite the death of their colleagues, Gazette staff immediately returned to work to report on the very crime that they had been subjected to—continuing a tradition of journalism at the paper dating back to the American Revolution.

The attack came at the height of damaging discourse about the press in the United States, when they were consistently labelled ‘Fake News’ and characterised as enemies of the people. For many members of the media, the shooting felt like a direct consequence of the ongoing denigration of the press via partisan politics.

Time’s decision to include the Capital Gazette—and all of the other journalists as Person of the Year—highlights how good reporting, facts and a commitment to truth expose the powers who attempt to conceal them.

Pride 2017 and the Importance of Bringing People Together

Pride represents an attitude we should all hold: One of openness, inclusion and - perhaps most importantly - a determination to have a really good time.

Thousands Attend Book Festival at Mosul Library That was Destroyed …

Earlier this month, the rejuvenation of the library reached another important milestone: an estimated 4,000 people attended a book festival at the site.

The best memes about growing up Muslim. What more could you want?