Billions of Muslims face toward the Kaaba to pray five times each day and it is the most sacred and holy site in Islam.

But how much do you really know about the Kaaba, the mysterious cube-shaped building at the centre of Mecca’s Al-Masjid al-Haram mosque?

The inside of the Kaaba is the only place in the world where you can pray in any direction you want!

Think about it. Inside, you are always facing the Kaaba.

The Holy Kaaba is sometimes called “The House of Allah.”

The Quran states that the Kaaba was the first ever House of Worship for Muslims and was built on instructions directly from Allah by the Prophets Ibrahim (PBUH) and Ismail (PBUH).

The Kaaba has been rebuilt many times.

Due to natural and man-made disasters, renovations have been made. The most recent one was in 1996 and due to advances in techniques it’s hoped that no further work will be needed for many centuries! (Insha Allah) 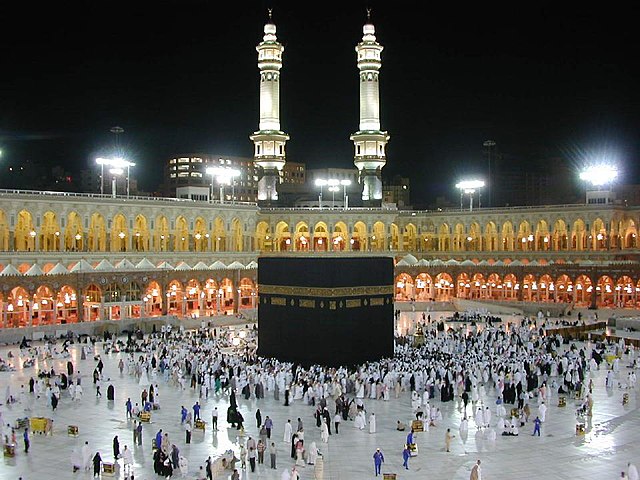 It used to be multi-coloured.

It’s currently famous as a black and gold cube, but centuries ago it was covered in colours including green, red and even white.

The same family holds the key to the door as in Quranic times.

The Prophet (PBUH) gave the keys to the Osman ibn Talha (RA) of the Bani Shaiba family. They still have them and there’s even a passage in the Quran that rules that they always will: ‘Take it, O Bani Talha, eternally up to the Day of Resurrection, and it will not be taken from you unless by an unjust, oppressive tyrant.’

The doors are only opened twice a year.

The Kaaba used to be opened twice a day for everyone to enter and pray, but now that millions of Muslims visit the site, only VIPs and dignitaries go in on special occasions twice per calendar year.

It used to be in the centre of a lake.

OK, this isn’t strictly true, but due to a lack of flood defences and sewer systems (eww!) in the old days, the mosque used to flood regularly and people had to swim to get to the Kaaba.

There are two of them!

But the other one is directly above the one we can see, in heaven. According to the Quran, 70,000 angels pray at the heavenly Kaaba, which is an exact replica, everyday.

It’s not meant to be cube-shaped!

It was originally a rectangle, but when it needed rebuilding just a few years before the Prophet (PBUH) received his first revelation, not enough ‘pure’ money – ie money that hadn’t been made from gambling or prostitution – was available to pay for the bigger, rectangular version. So we now have a cube. But this is how the Prophet (PBUH) saw it.

It connects Muslims around the world.

The Kaaba plays an important role, not only as focal point for prayer and the original house of worship, but also as a symbol that unites all Muslims, wherever we live in the world.

Why Being Green Is Part of Faith

"As Muslims Islam teaches us to serve humanity irrespective of faith, colour, race or no faith. Serving our own local …

Mosques are not only a place of worship, they are a refuge, a haven away from everyday troubles, & a place where you are more spiritually connected to God.

This Instagram is Documenting the Incredible Places Muslims Pray

All of the posts on Places You’ll Pray remind us that Islam can be observed no matter your environment, whether its natural or manmade.